Private sector lender IndusInd Bank posted a 23.8 per cent rise in net profit at Rs 10.36 billion for the quarter ended June 2018 on higher income, mainly from interest, as compared with a net profit of Rs 8.36 billion in the corresponding period last year.

“Our profitability was affected by government securities falling by up to 50 basis points during the quarter, which also affected the banking sector profitability as a whole. We also had mark-to-market losses of Rs 86 crore (Rs 860 million) and have fully provided for the same,” Romesh Sobti, chief executive and managing director, IndusInd Bank, said on Tuesday.

Total income during the quarter rose to Rs 63.69 billion, up 20 per cent as against Rs 53 billion in the same quarter last year. The net interest income was Rs 21.2 billion, a jump of 20 per cent from Rs 17.74 billion earned in the same period a year ago, while the net interest margin (NIM) contracted to 3.92 per cent in June from 3.97 in the March quarter. The bank has an NIM outlook of 3.9 to 4 per cent for the year.

The overall provisions during the June quarter rose 13 per cent to Rs 3.50 billion as against Rs 3.10 billion a year ago.

There was a slight deterioration in the bank’s asset quality, with the gross non-performing assets (NPA), as a percentage of gross advances, standing at 1.15 per cent as on June 2018, as against 1.09 per cent a year earlier. However, it was an improvement over the previous quarter’s gross NPA ratio of 1.17 per cent as slippages shrunk. 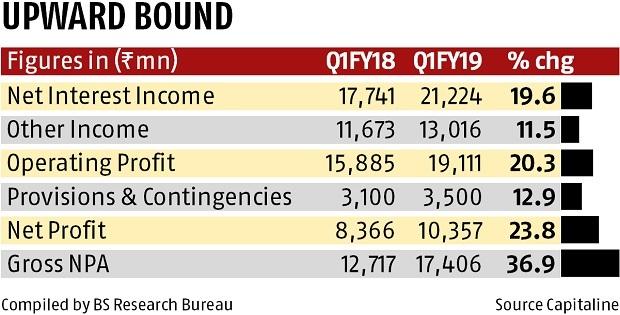 The bank remains positive on its NPA outlook and said that asset quality would be stable.

The bank’s capital adequacy ratio as on June 2018 stood at 14.7 per cent as against 16.18 per cent in the year-ago quarter and 15.03 in the March quarter. However, the bank “doesn’t anticipate raising any capital in the near future.”

“We have enough capital for growth and our capital adequacy will improve after the merger with Bharat Financial, which also has high capital,” said Sobti.

The bank has already received approval from the Reserve Bank of India, the Securities and Exchange Board of India and the stock exchanges regarding the merger. It is now awaiting the final approval from the National Company Law Tribunal.